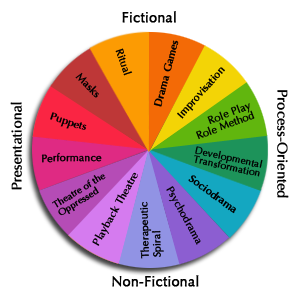 The Drama Therapy Pie was established by Sally Baily, MFA, MSW, RDT/BCT. Within the pie are two different directional continuums. The up to down continuum ranges from fictional enactments to ones that are more true-to-life. Fictional work allows clients to pretend to be characters different from themselves. The left to right continuum ranges from presentational to process-oriented enactments. Other methods, such as puppets, masks, rituals, can be used as part of performance or as process techniques within a therapy session.

The Drama Therapy Methods and Modalities listed below are basic definitions/concepts and do not include the many complicated details and techniques associated with each.

Workshops are carefully designed to meet the needs of each client. Learn more

Peyton is a proud member of the following organizations: